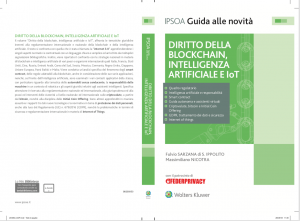 The work, wich has more than 350 bibliographic and source references of the major international law reviews and reports on the development of artificial intelligence and blockchain,  scans what has been called the “Internet 3.0”, deepening the individual regulatory and contractual aspects with a clear and simple language.

A specific analysis of smart contracts and the applicable rules to the blockchain is carried out, in consideration of its technical specificity, as well as for the artificial intelligence, on its various application, with special regard to the issue of driverless cars, machines and robots liability and the legal aspects of intelligent assistants.

The book also focus on national and international standards, jurisprudence, laws and authority statement on cryptocurrencies, starting from bitcoin, as well as the Initial Coin Offering regulation.

Furthermore the authors analyzed the dealing between these new technologies and theta protection law, especially in consideration of the EU Regulation no. 679/2016 (GDPR), and the international security and issues related to the Internet of Things.